Q: I currently have three adolescents at home who have been cooped up for months. They’ve been fighting more than usual because they’ve been on top of each other ALL THE TIME! Oddly my eldest, who is leaving for college very soon, has been particularly difficult lately. This is out of character for her, since she’s usually the peacemaker. Any advice?

A: Actually, what you’re describing is surprisingly uncommon. Psychologists have observed that when adolescents are about to separate from their families they can tend to pick fights before leaving for college. Perhaps she’s been acting this way, unconsciously, to create tension so saying goodbye will be easier for you both. Your daughter is probably feeling ambivalent (not that she’d admit it!), and maybe even a little anxious, about leaving the nest. Parents often feel the same mixed feelings about their children leaving. So perhaps your own feelings could be contributing to tensions as well. And just to complicate things, if a child’s departure for college has been delayed for a year because of COVID, those feelings of frustration are likely in the mix as well. Here are three tips to ease the tension: 1. Reassure her that you’ll be seeing her a lot and that Thanksgiving break is around the corner. 2. Tell her how amazing college can be and how confident you are that she’s ready to handle the challenge. And lastly, 3. Remind her that you’re only a phone call away and that she can call you anytime. 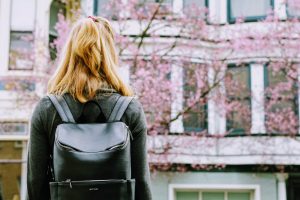 Originally posted in The Lakelands Leader in August 2021.